An Open letter to the German Postal Service

I never thought I would be interrupting my normal blog schedule to bang on and on about my absolute hatred for the postal service in Germany, but here I am – venting my anger for all the world to see. In fact, you know who I hope sees it? DHL and DPD becuase you, YES YOU are doing my nut in.

Dear all postal services in Germany, this letter is for you (esp. if your name is DHL or DPD. GLS, you chill.),

To me it is a huge problem when you actually question making those amazon prime online purchases meant to make your life easier (which normally should be a godsend for a freelancer working from a home office half the time) or having people mail things to you for fear that it will: a) arrive too late, b) you will have to chase your package down yourself, or c) it will just never arrive at all. All three scenarios have happened to me multiple times since living in Germany.

Now sit down boys and girls of the German postal service and grab a cuppa, because do I have a story for you. It’s the tale of the little package that couldn’t and took 12 days (and counting) to get delivered since being dispatched from the UK. 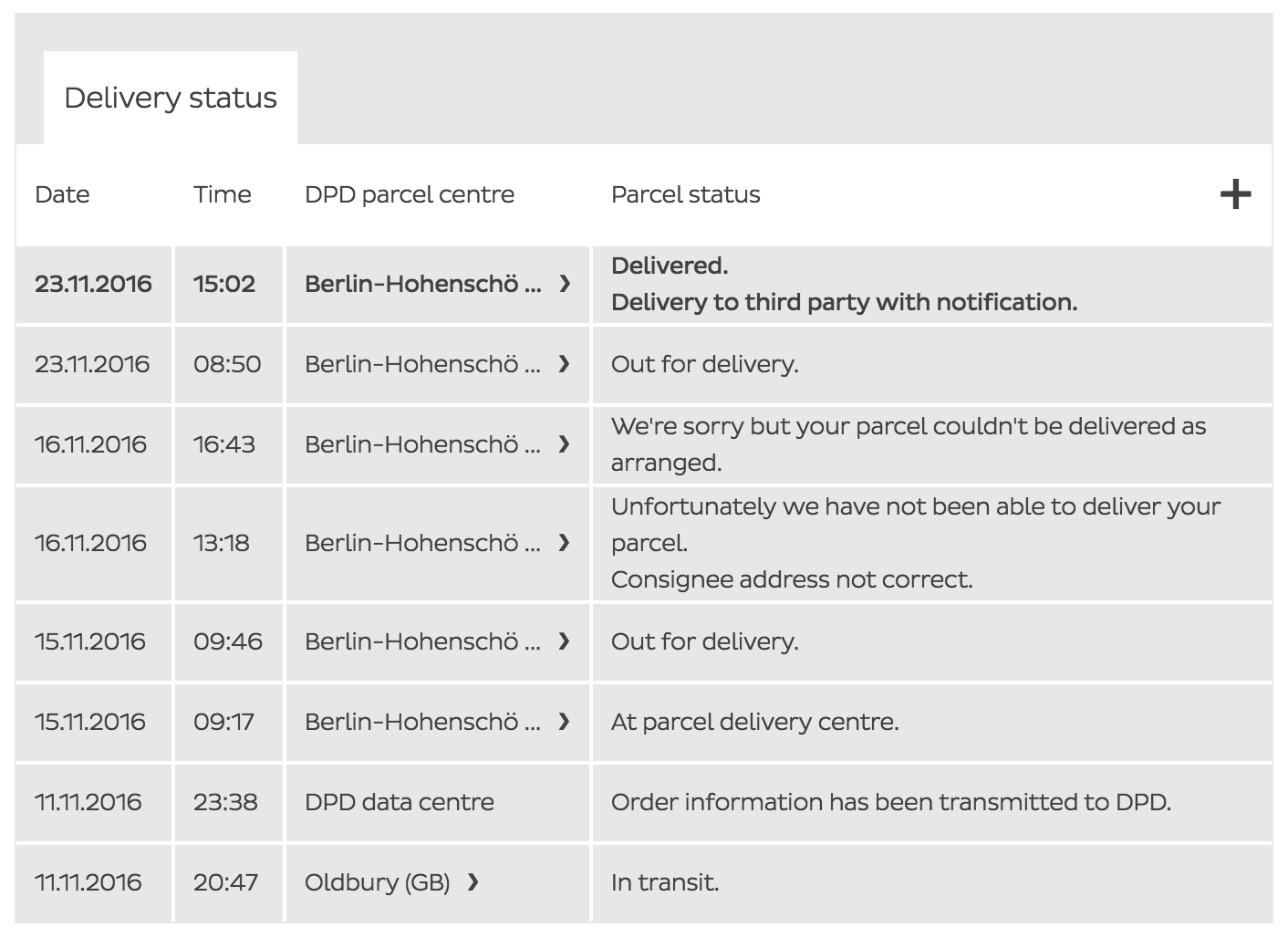 The proof. Just in case you thought I was lying.

But this is Germany and the german postal service we are talking about, where nobody gives a shit and put slips in your box informing you your package has been delivered to a neighbour since you were not home despite you sitting patiently at home all day for the damned doorbell to ring (Spoiler Alert: It never rings, they never come.) Which, to be fair, is still better than the other popular variety where no package or slip is ever delivered and you have to play the “who the hell in Berlin has my package?” game all on your own. But I digress.

On this particular occasion, a letter was not dropped into a letterbox because the address was incorrect. The package was simply not delivered at all. And so, after cancelling a photoshoot and sitting at home waiting for a package that never came due to DPD’s very precise text message informing her of the delivery of her package between 10:52-11:52 Rae picked up her phone and braved the annoying and DEFINITELY NOT FREE DPD customer service hotline. Her first call was unsuccessful, as the woman on the other end told her she needed to look into it and would call back. (She didn’t.)

Rae’s second phone call was a particularly noteworthy one. She explained the entire situation to the woman on the other end of the phone who just kept interrupting with the repeating words “Sendungsnummer bitte?” (Order number please?) Clearly this woman was not interested in hearing the specifics of the situation.

“I am trying to explain to you the situation. Is it so difficult to just apologise for the inconvenience?” Asked Rae incredulously.

“Well I need to have the order number to know if there is something I need to be sorry about.” Snapped the woman on the other end, un-phased.

Taken aback at the complete lack of sympathy or human emotion, Rae gave in and gave the woman the order number. The woman informed Rae of an incorrect address and emphatically stated that this was certainly not her fault personally and certainly not DPD’s fault, and clearly the fault of the original company who wrote down the incorrect address. (Rae checked in with the original company who sent out the package – they had the correct address.) She then told Rae if she was looking for an apology, maybe the original senders would give it. Rae effectively lost her fucking shit, and hung up on the insert-derogaty-word-here.

Determined to get her package, Rae called the hotline again, corrected the address once again, and was told her package would be sent out the next day. This particular pattern continued for several days into the following week, with the same result – Rae sitting at home cancelling appointments to be there when her package arrived for fear of encountering the “slip in the letter box” problem to no avail. 9 calls to the hotline, 5,40€ (yup, you have to PAY DPD when they fuck up) 4 promises of delivery, 1 promise of a call from a supervisor that never came, 0 apologies, and about an hour after the last promise of delivery later, with still no package in sight, Rae checked the DPD website to learn her package was given to a third party.

And so Rae did what any normal person in this modern nihilistic ego-driven world without any actual personal agency would do – she took to facebook and twitter angry-status-updated/tweeted about the whole goddamned situation.

Well, hell, I never said this would be a happy story with any kind of positive outcome.

The point is this. Why? Why have people stopped being able to do their job properly? I don’t want to say it, but, ONE JOB, man. ONE FREAKING JOB. And why is it apparently impossible to apologise? Is that not the first thing one learns during customer service training? If no one is willing to apologise and no one is willing to admit fault, then why don’t I still have my mother-fucking package? Why did I have to cancel very expensive photoshoots and meetings, and waste time sitting on my arse in my flat for something that never even ever came?

Is it a question of under-staffed companies full of underpaid and over-worked employees? If it is, then sort it out. Hire more people, pay the ones you have better wages and take some kind of goddamned responsibility. You are a fucking company for fuckssake. My job, as do countless other people’s jobs, relies on receiving post in the mail.

I understand that in the grand scheme of things, this is a relatively first-world problem. But it ceases to be trivial when I have to miss work and end up loosing money and time as a small business owner because something that should have been done right has not been done at all. Hell, I should be getting paid by the DPD cos I’ve done 90% of the work concerning getting my package and I still haven’t got it in my possession yet.

And please, for the love of all things that are holy and sacred, teach your customer service workers the value of a heartfelt “I’m sorry we fucked up” or just an “I’m sorry that sucks.” People seem so hellbent on making sure it’s known that they are personally not to blame when it’s not about them. It’s about a service not being done properly, and a small acknowledgement of how fucking inconvenient the situation is goes a long fucking way.

To be honest, I think there are some cultural differences that come into play here, as well as the shortcomings of putting profit over function/productivity but the main takeaways are these:

We are at your mercy. I can’t run over to the edge of the European Continent, swim to the UK jog over to a warehouse, pick up my package, and jog/swim/run all the way home. (Although I’m thinking that had I done that, I’de have long since had my package already.) I don’t like angry tweeting in all caps, trust me. No one does. But we live in a global community ruled by capitalism where I have little other options left than to be angry on social media. And so this open letter is my olive branch – albiet full of salt and swear words – to you, DPD (and you DHL, don’t worry I have not forgotten about you either) as well as all the other postal services who don’t seem to give a shit about the inconveniences their lack of caring and proper delivery causes.

You are only as good as your worst delivered package. And mine ain’t even been delivered yet. Sort your shit out. And then maybe we can talk. And I want my 5,40€ back! (To be read in the voice of Damien from Mean Girls.)

p.s. Stay tuned for the next story about the time it took me over a month to get my sofa.

The first ever LFB Q&A. Ask me anything.

Thank you to my November sponsor, Dee Shoots!