Colorism and the Dove Shitstorm

The internet exploded last week when Facebook user and makeup artist, Naomi Blake (@Naythemua), posted screeshots from a Dove ad which she posited as racially insensitive.

The ad has since been removed, but an article written by Lola Ogunyemi, the african american woman and face of the now deemed ‘racist Dove ad’, explained that this four panel image did not show the whole picture.

Ogunyemi stated that the ad was not about a “before and after” but about several women, all of different ethnicities” turning into each other once their shirt, matching their skin tone, was removed. Ogunyemi explained that the first Facebook ad which was released was a 13-second video which featured herself, a white woman, and an Asian woman all removing nude tops to essentially transform into each other. The full 30-second TV commercial, which aired in the US, included seven women of different races and ages turning into each other. Ogunyemi stated that she was the first model to appear in the ad as well as the last model in the sequence. 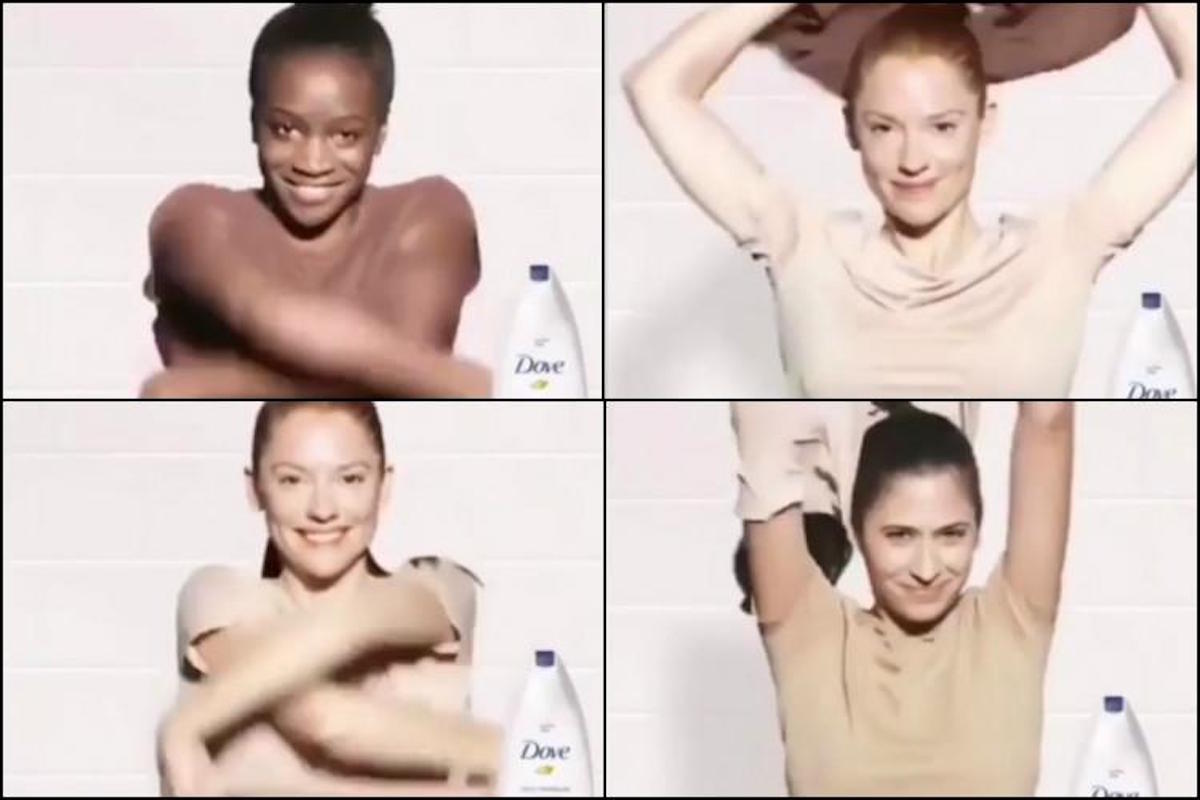 Ogunyemi highlighted this fact in her article:

“I can see how the snapshots that are circulating the web have been misinterpreted, considering the fact that Dove has faced a backlash in the past for the exact same issue. There is a lack of trust here, and I feel the public was justified in their initial outrage. Having said that, I can also see that a lot has been left out. The narrative has been written without giving consumers context on which to base an informed opinion.

While I agree with Dove’s response to unequivocally apologise for any offense caused, they could have also defended their creative vision, and their choice to include me, an unequivocally dark-skinned black woman, as a face of their campaign. I am not just some silent victim of a mistaken beauty campaign. I am strong, I am beautiful, and I will not be erased.”

So then what is the big deal? Naomi Blake, the Facebook user who created the 4 panel image and kicked off the shitstorm that now surrounds the ad, explained her position in an interview with GMA. She told GMA she was illustrating the ad’s unintended message. “We are putting out these ads with these subliminal messages that are telling young ladies that your darker skin is not beautiful enough, you need to purify and clean yourself. And this was a tone-deaf ad that I felt like was a representation of colorism in the world.”

Dove apologized, stating “Dove is committed to representing the beauty of diversity. In an image we posted this week, we missed the mark in thoughtfully representing women of color and we deeply regret the offense that it has caused. The feedback that has been shared is important to us and we’ll use it to guide us in the future.” But even this apology was criticised by some, stating that “missed the mark” downplayed the seriousness of the issue and was downright insulting.

So here is the thing, although this ad was taken out of context, Ogunyemi herself touched on something very important – that there is a lack of general trust when it comes to Dove (who is no stranger to allegations of racist campaigns), any other corporate company, or society in general when it comes to representation of people of color by the white majority, no matter how earnest and sincere the intentions behind said representation may be.

It is true Dove’s “good intentions” fell short. It’s also true this ad was taken out of context. And society is right to bring attention to the misguided ad. But moreover, this is a larger discussion about the ways in which white privilege causes companies at large to fail at performing even the most basic attempts at inclusivity. Events do not exist in a vacuum and neither to ads. Trying to do the right thing and promote equality is not enough. This needs to be done with sensitivity and an understanding of how race relations have played out throughout history.

There is a long tradition of POC feeling the need to lighten their skin to be more accepted in society. This was an ad about a body wash. Body wash. Soap for the skin. Regardless of how many women were featured, a black woman did essentially turn into a white woman by “using” this product.

If social, racial, and historical aspects are taken into account, this could have been prevented. Someone from Dove might have said – hmm having a black girl wash her way to being white miiiiight come across as racist, let’s save this concept for another product that isn’t about cleaning yourself. Or someone else might have said, well let’s still run with this, but have the white woman “change” into the black woman to avoid any ties to white-washing, neo-colonialism, institutionalized/systemic racism etc.

There are certainly times where people are unjustifiably angry. Unjustifiable anger can happen in any context, including conversations about race, but Naomi Blake is right in calling attention to something deeper than Dove. Might one also add – even if the outrage was “unwarranted” or an “overreaction” – so fucking what? We need to go back to Ogunyemi’s initial point about a general distrust from POC concerning the white majority and their attempts at solving the “race problem” time and time again without the proper sensitivity or attention to the past and the present. POC have had to put up with enough justified and legitimate bullshit that we are allowed to get unjustifiably angry every now and then. Just sayin’.

The LFB Team would love to hear your thoughts on this extremely important topic. Please let us know in the comments below.